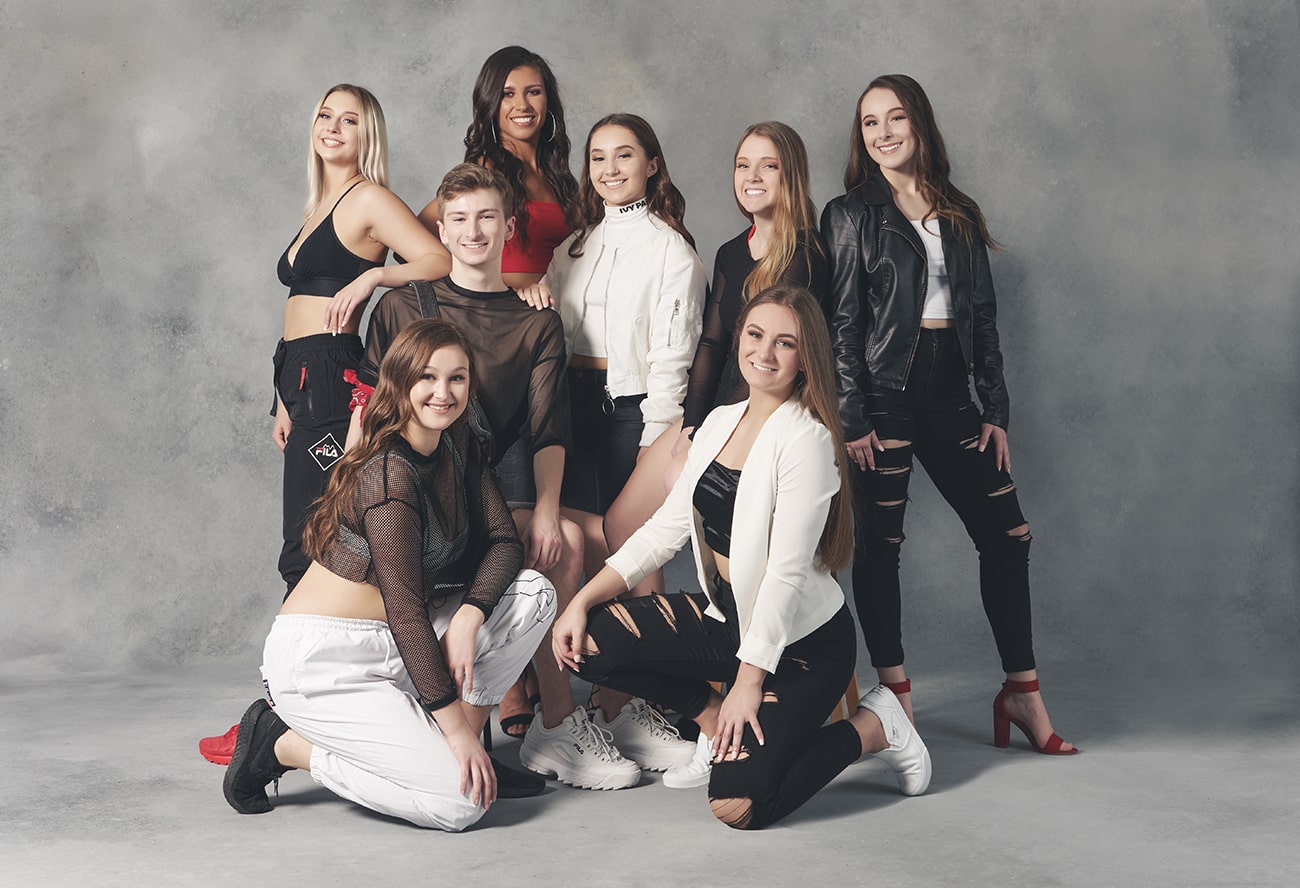 Download Resume Dance has always been an integral part of Toronto-based Brooke Van Dyk’s life. Growing up she spent most of her time at her mother’s dance studio, which inspired her to pursue a career as a professional dancer.

An honours graduate from Centennial College’s Dance Performance Program in 2018, the 5”10, blue-eyed Brooke also completed the Intrepid Dance Company post-secondary training program in 2020, took part in the National Ballet of Canada In-studio Summer Intensive of 2017, and has received acting and singing training from Wendy Irvine.

Brooke’s fledgling career has already seen her involvement in a number of high-profile performances, including opening for The Bare Naked Ladies at Casino Rama, the Samsung-sponsored Illuminite tree-lighting ceremony at Dundas Square in 2016, 2017, and 2018, and Downtown Vancouver charity show “H’arts for the Homeless”. Other credits include On The Floor’s A Night for SickKids Gala, directed by Mitchell Jackson and Derek Piquette, in 2019, the opening performance at NUSKIN, choreographed by George Absi, the Centennial College Half Time Show, Lady Luck Productions’ Holiday Show, an Irish Dancing performance at the Fairmont Royal Hotel, Carnival: LA, and the SickKids Dinner Party.

Aside from her own performances, Brooke has considerable experience teaching others. She began her teaching/choreography career back in 2013, where she taught at Island Dance Studio until 2015. Next, she spent a year as teacher/choreographer with Step with Style Dance Productions, before taking on a new role with Precisions Dance Company in 2016, which she held until 2019.

Her hard work has been recognized in the form of the Jasmin Reville Cechetti Bursary in 2013, and the Be Discovered Scholarship in 2015, on top of her Honours Graduate status at Centennial College.

As a testament to her flexibility and multi-disciplined approach to live, Brooke is Acrobatic Arts Certified, a certified Yoga Instructor, and Smart Serve certified Waitress. With her successes to date, and training from some of the top names in the industry, like Derek Piquette, Mitchell Jackson, and Linda Garneau, Brooke hopes to continue to grow as a professional dancer and explore all the opportunities presented to her throughout her career.

Download Resume Christian Gaillie’s dancing journey began with his local studio, Centre Stage Dance Studio in New Hamburg, Ontario. It’s here that he discovered his love for the art and took his first steps as a dancer, before progressing to Centre Stage’s sister studio, Unlock Unleash Control in Kitchener, between 2010 and 2013.

In 2013 Christian enrolled in Kitchener’s IN.MOTION School of the Performing Arts, where he began to see dance as a potential career opportunity in his future.

His time at high school saw him training both inside and outside of school, becoming co-lead of one of his school’s dance teams, and finding great success in his progress. Following a successful audition for a summer training program at the National School of Ballet, Christian was offered a position to train full time with the School. He would ultimate make the difficult decision to pass on their offer, however, in order to pursue a more varied selection of dance styles through his ongoing training.

With a total of 9 years’ worth of competitive dancing under his belt already, Christian recently graduated from Intrepid Dance Company’s post-secondary training program, where he trained under names like Derek Piquette and Mitchell Jackson.

Christian’s hard work and dedication to dance has certainly paid off, and he has been recognized with an assortment of awards including Senior Dancer of the Year from Luv 2 Dance, and Dedication to Craft Award from OSSD Dancefest.

As his career continues to flourish, Christian can already count an impressive roster of appearances in his catalogue, such as performing on the Carnival Cruise Line, at the Stratford Fringe Festival, in the Gemini Models Fashion Show, and at the Toronto Raptors’ half time show.

Christian is eager to see what the future holds for him as he continues his professional development in a variety of dance styles, and welcomes every opportunity to grow as a professional, and a person.

Download ResumeBorn and raised in a small town on Cape Breton Island in Nova Scotia, Emily’s history in dance to be charted all the way back to when she was just 3 years of age. It was during these formative years at D&R Dance Ltd. that she discovered her affinity for the performing arts, and by the age of 15 she would become a teacher at the studio, helping the next generation of youngsters to follow in her footsteps.

In addition to her dancing, Emily is a keen choreographer, always eager to learn and apply her own personal style to various styles of dance. In 2018, she was declared 1st overall winner of the Taking Steps to Fly choreography competition, which is a testament to her flourishing skills in the field.

At 18 years of age, Emily decided that it was time to look further afield in order to further her development as a dancer. She was honoured to be accepted into the inaugural year of Intrepid Dance Company’s post-secondary training program in Toronto and made the move west to join up with her fellow students.

It was here that Emily had the opportunity to train under a hugely experienced faculty that included names like Linda Garneau, Mitchell Jackson, and Derek Piquette among others. The program also provided her with the chance to deepen her versatility training in a wide range of styles, including ballet, tap, jazz, lyrical, contemporary, modern, hip-hop and Latin ballroom.

As a dancer, Emily is proud to have been involved in an assortment of live performances to date, including Chiaroscuro (Made with Purpose), The Rotary Show (Highland Arts Theatre), and the Rocky Horror Picture Show (The Savoy Theatre), and looks forward to showcasing her abilities in more performances in the very near future.

Passionate about dance, always eager to learn and improve, and dedicated to helping others, Emily is definitely one to watch in the years ahead. 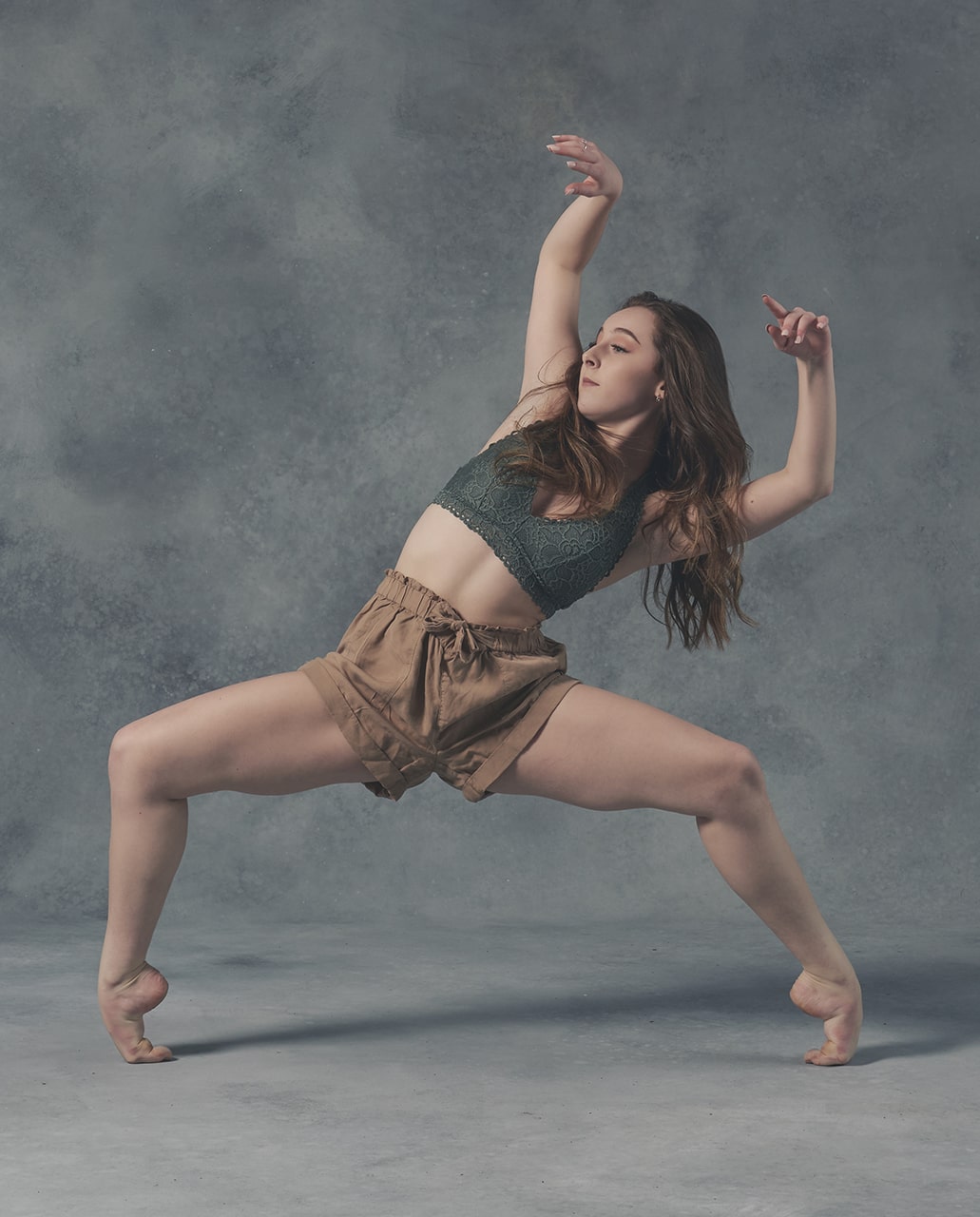 Download ResumeNadia began dancing at the tender age of 6 at Simcoe Dance Academy, located in Bradford, Ontario. From those earliest of days, she would ultimately spend a total of 12 years at the Academy under Sheila & Alexandra Vecchiarelli, until she turned 18.

Always eager to push herself in a bid to grow and improve as a dancer, Nadia would spend 4 of those years as a teacher/assistant, lending her experience and talent to the younger members of the Academy, always impressing with her passion for the art of dance.

As a dancer, Nadia boasts talents for a broad range of styles, including ballet, modern, lyrical, contemporary, jazz, hip hop, and acro, which makes her an incredibly well-rounded performer. The versatility has served her well in her live performances, which include On The Floor’s 2018 A Night for Sick Kids Gala (directed by Mitchell Jackson and Derek Piquette), the 2015 and 2016 Bradford’s Business Awards (choreographed by Alexandra Vecchiarelli), and the Gabby’s Boutique Gala Show (also choreographed by Alexandra Vecchiarelli).

With seven years of competitive dance under her belt, which resulted in numerous awards and recognitions, Nadia is now focusing on the next steps of her career of a professional dancer following her graduation from Intrepid Dance Company and is excited to see what the future holds for her within the dance industry. 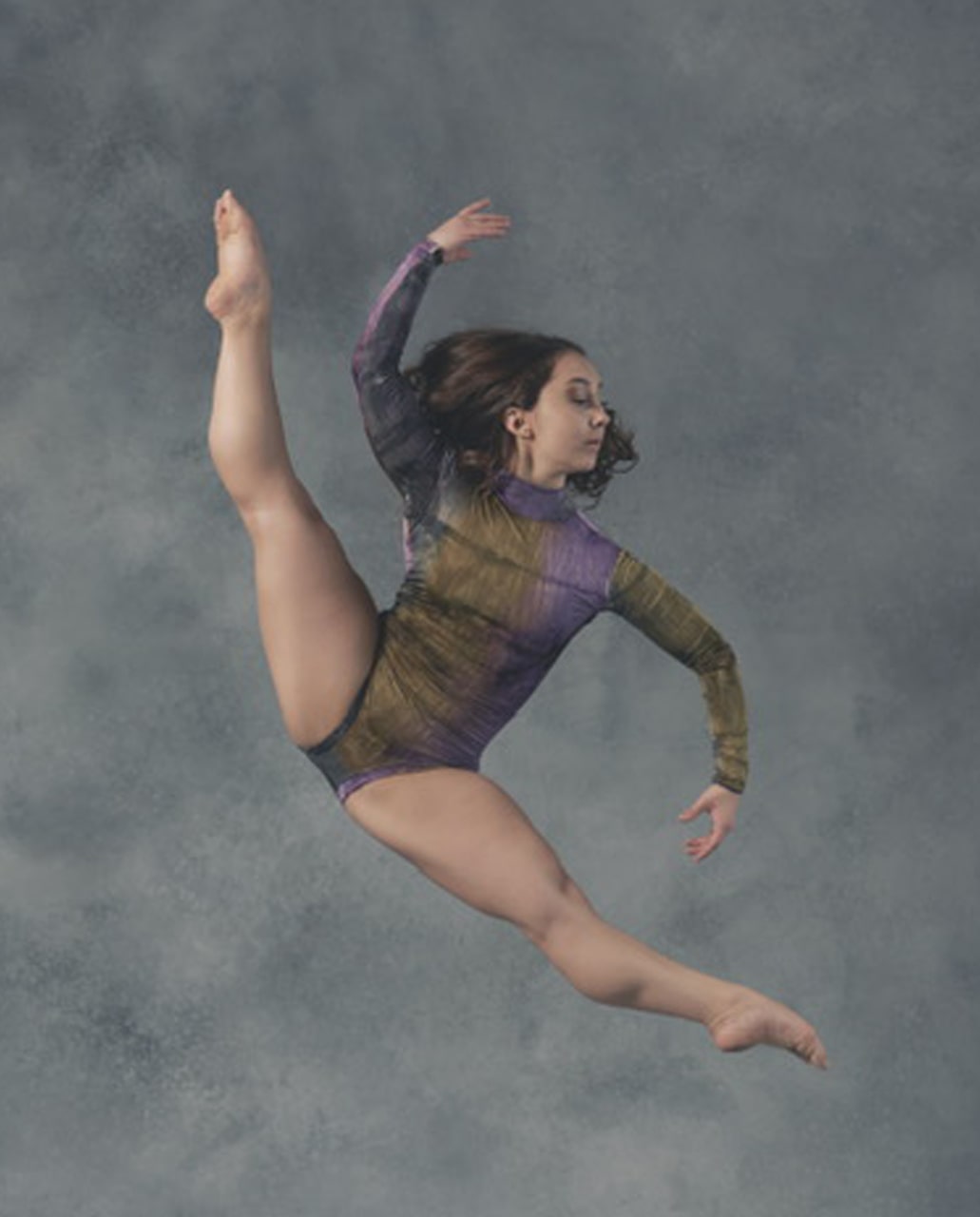 Download ResumeA keen dancer from the age of 5, Sabrina Laplante boasts a huge amount of experience for someone at the early stages of her dance career. Her story began at ExtravaDanse Academy in Rockland, Ontario, where she spent a year between 2004 and 2005, before joining Mirage Dance Studio, where she would remain until 2010.

During the final three years of her time at Mirage, Sabrina also trained at Ecole de Danse Louise, based in Orléans, Ontario. It was during this time that she would begin to dance competitively, and truly found her passion and love for dance.

At the age of just 13, Sabrina began assisting dance classes, before becoming a fully-fledged teacher in her own right by the age of 16. She specializes in teaching hip hop, jazz, contemporary, ballet, acrobatic and conditioning, with a focus on strength and stretch. For Sabrina, teaching just about helping her students to become better dancers, but also to grow as people, and focus on bettering themselves every day.

This attitude has served Sabrina well, and her catalogue of work to date is incredibly impressive for someone so young.

Sabrina has competed and performed as far afield as New York and Toronto and can boast training under well-known industry dames like Nika Kliun, Teddy Forance, Mark Meismer, Blake McGrath, Derek Piquette, and Mitchell Jackson among others. In 2019, she began cheering with the Toronto Argos, adding yet another string to her bow.

On top of her early training, Sabrina has also sought to improve her skills by taking programs at Centennial Dance College (2017-2019), Intrepid Dance Company (2019-2020), Millennium Dance Complex Toronto and LA, and Play Ground LA, which have all contributed to shaping her unique and versatile set of talents.

Away from dance, Sabrina has studied Kinesiology at York University and aims to become a physio specializing in the spine. takes her fitness very seriously and undertakes 4-6 sessions per week with her personal trainer, while also training to become a personal trainer herself, as well as a nutritionist.

Sabrina has recently been taken on by the acting and modeling agency, Angie’s AMTI, which she hopes will help her to expand her skillset and help further her career. 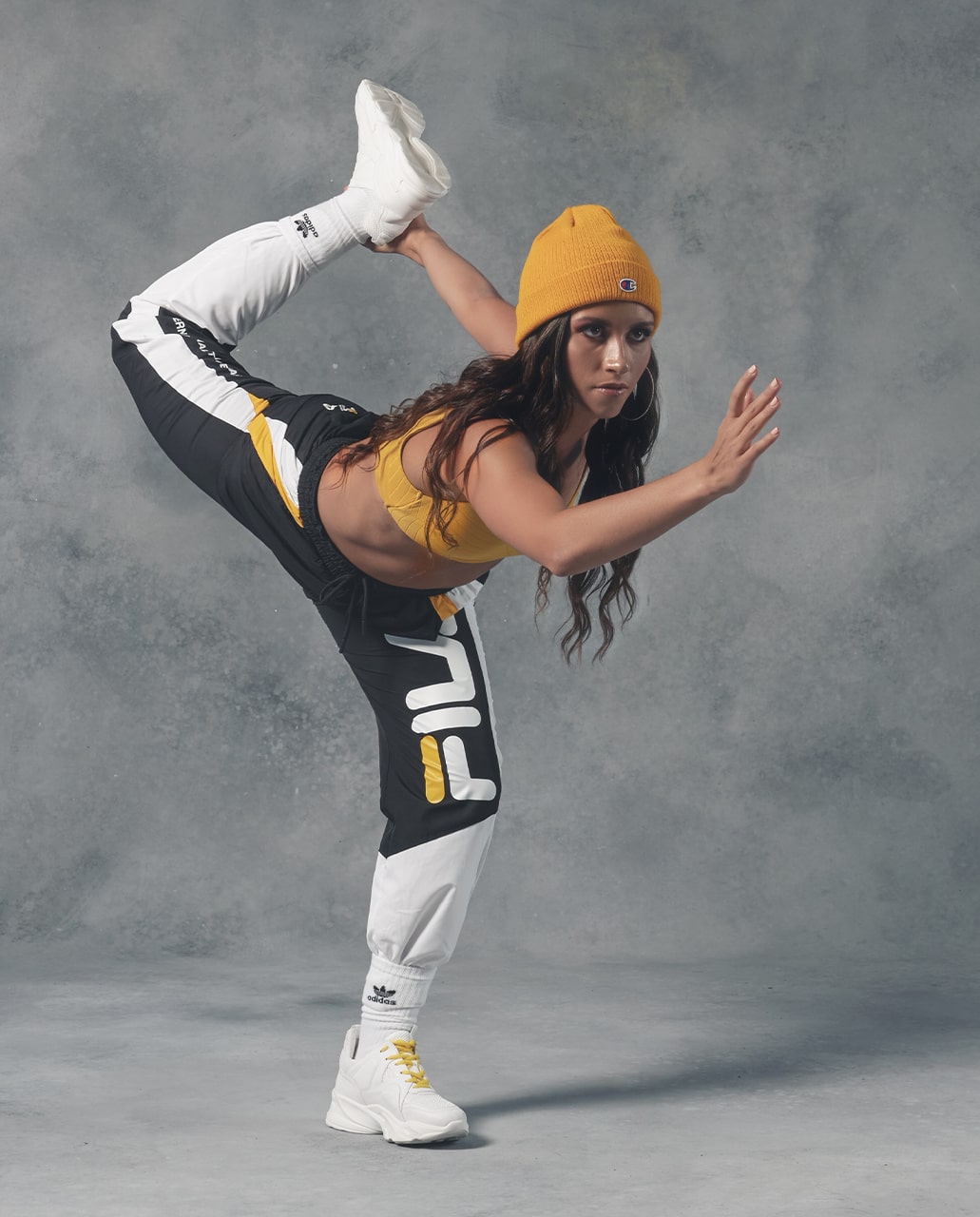 Download ResumeSaige Kaczun, a native of Whitby, Ontario, began dancing at just 3 years of age, before starting to compete in local and regional dance competitions at the age of 8.

Since then, she has shown no signs of slowing down, with a blossoming dance career that has already taken her all over the world. Saige has already represented her country internationally, joining Team Canada to compete as far afield as Germany and Poland.

In addition to her time with the national team, Saige has also had the opportunity to perform in Cancun, Mexico, with Five Star Dance Company, providing her with even more experience both on the stage, and in her personal life.

Saige has recently graduated from Intrepid Dance Company’s post-secondary training program, which provided her with the opportunity to train under some of the industry’s top choreographers, like Derek Piquette, Alisha Lucchese, Mitchell Jackson, and Linda Garneau.

Her time at Intrepid has also helped Saige to gain a deeper understanding of the dance industry, with the program covering topics as varied as injury prevention, audio editing, and lighting design, and her certification as a makeup artist will no doubt open even more doors for her in the future.

As her career progresses, Saige hopes to become a regular fixture on the global stage, performing to audiences worldwide, and establishing herself as a respected industry professional. 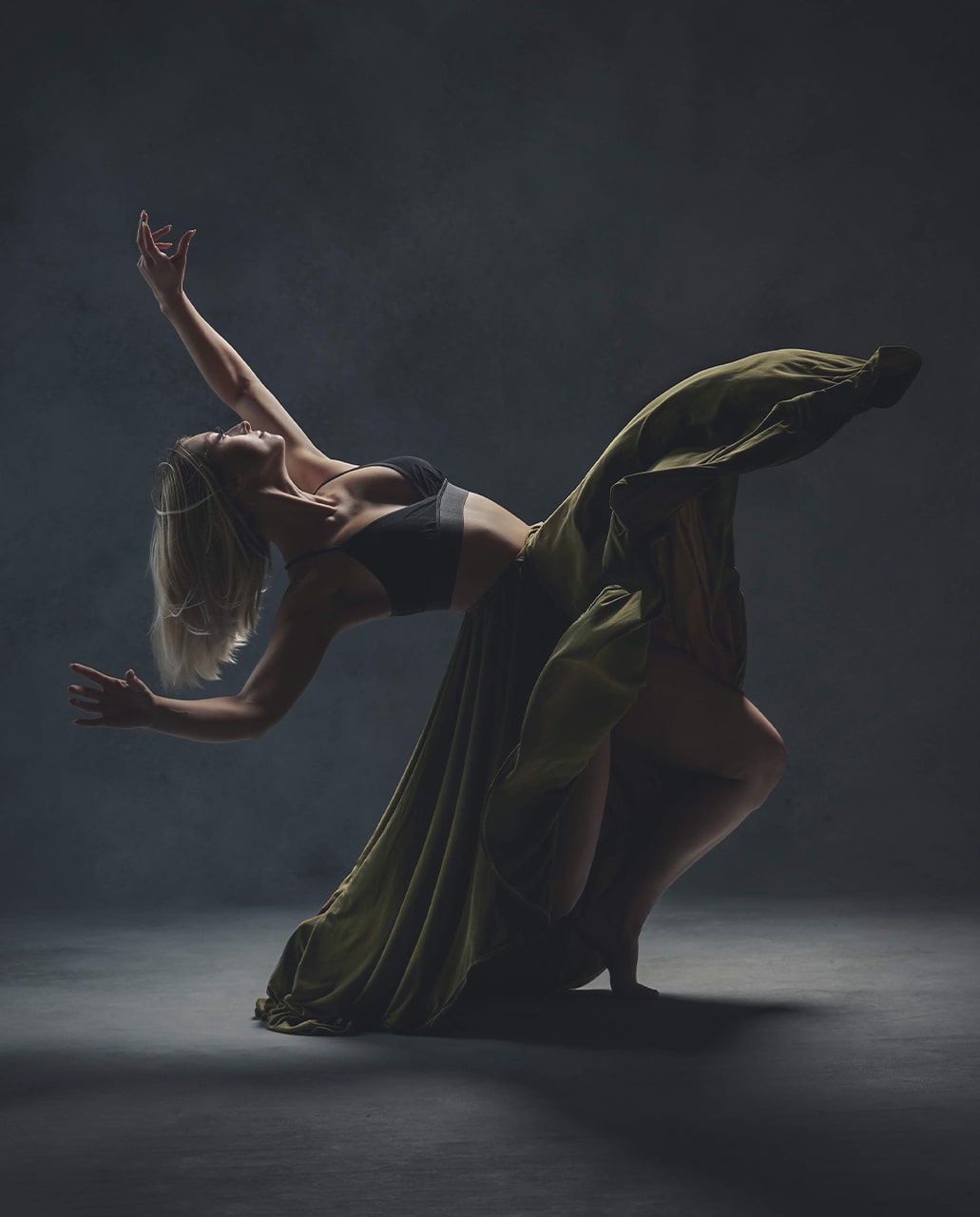 Download ResumeTBorn in Newmarket, Ontario, Taylor Flewwelling grew up in Innisfil, also Ontario, taking her first dance classes at the tender age of 6. Despite being a committed dancer for the 14 years that followed, Taylor found herself unsure of whether dance was something she wanted to pursue full-time.

Like many of her peers, she decided to take some time out to travel overseas – a decision which helped her to realize that dance is her true passion, and something she simply can’t live without.

Regardless of her own doubts at the time, it was always obvious that Taylor would make her way in the dance industry. Aged just 16 she began teaching at L.A. Dance Design, and continues to teach there to this day.

As a competitor, she has won countless overalls, adjudicator awards, and scholarships (including the Hollywood Tour Summer Scholarship, the Raise the Barre Scholarship, and the 24Seven Dance Convention Scholarship) over the years.

Following a stint training in Hollywood, Taylor returned to Ontario to enroll in Intrepid Dance Company’s post-secondary training program, from which she graduated in 2020.

Known among friends for her favourite quote “keep on keeping on”, it certainly looks like Taylor’s dance career is set to do just that, as she continues to grow as both a dancer and a choreographer.